ServiceNow Integrated Development Environments ServiceNow has been around for a while. The tool grew rapidly, and the dev IDEs adapted and tried to remain useful and supportive to the developer. ServiceNow standard IDE is still widely used but as ServiceNow becomes more and more popular (as if it was not popular enough at this point!), … Continued

ServiceNow has been around for a while. The tool grew rapidly, and the dev IDEs adapted and tried to remain useful and supportive to the developer. ServiceNow standard IDE is still widely used but as ServiceNow becomes more and more popular (as if it was not popular enough at this point!), more tools and companies are getting interested in becoming involved with it.

Hundreds of applications are already published in the ServiceNow Store and just last year integration with Microsoft VS Code was launched worldwide.

Good old standard ServiceNow IDE. All ServiceNow developers are used to this IDE. Usual development support is limited: javascript validation, code formatting, search and replace feature, global variables show their methods and attributes, visual indicators for variables and methods and lately, access to other included scripts. While limited, it’s been doing the job for a long time. 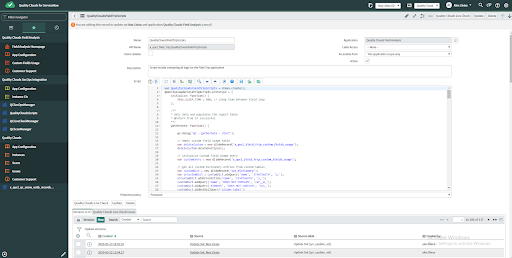 A development oriented application. Includes all the Standard IDE features but adds key integrations with GitHub and the ServiceNow Store. When the developer accesses for the first time to the Studio, he can create a new application or import an existing one from source control. Creation of a new application from Studio allows a basic initial setup, including name, description, icon, basic initial security, table structure and design (classic or mobile).

After creating the application, new application files can be created which will be allocated in the currently selected application.

Studio becomes very useful when developing applications. Direct access to source control allows the user to easily commit or apply remote changes to their application. While it misses the usual left module menu from the standard interface, it gives the developer the ability to maintain several opened records, work on them simultaneously avoiding the inconveniences of multiple tabs opening the standard IDE has (mainly opening in a new tab does not maintain the left panel and the back button goes bananas).

Tip: The Code Search tool is neat in Studio. You can search your code within your application but also outside of it. Also, avoid editing Global Applications in Studio, weird things are bound to happen.

ServiceNow’s latest feature, Visual Studio Code plugin. Allows the developer to integrate with his/her ServiceNow instance (via basic auth or OAuth) and work on his/her applications in his own machine.

Definitely the most complete IDE for developing in ServiceNow. Supports the developer with code completion, validation, formatting, visual indicators and ServiceNow Glide libraries code completion. Ability to execute background javascript scripts, automatic synchronization with the ServiceNow instance and the ability to simultaneously work on separate applications: each application creates its own project in your machine.

While all these features are neat, the possibility to download your applications, work on them offline and then re update when online, makes considering work on VS Code worth.

Tip: Please! Check the Run Background Script feature. Only this makes it worth switching. Select a piece of code, right click and select Run Background Script (you can even run it directly in the Global scope) and the results will pop up in the editor directly, without having to check ServiceNow for the output. 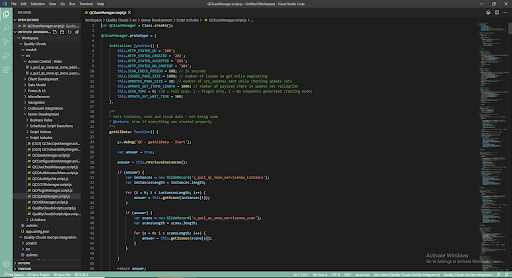 Good news! All IDEs are great. ServiceNow default IDE is powerful, versatile and anything can be accomplished with it. It is the most widely used and every ServiceNow developer knows his way around it. Studio is very focused on application development. You are able to see all your application files quickly and allow for more control and quick access to source control and application creation. VS Code offers the most advanced capabilities you can get from an IDE. Features like working on your code offline and the Run Background Script feature offers a leverage that makes it worth trying it. Also, if you are used to other development tools and IDEs this will sound more familiar to you.